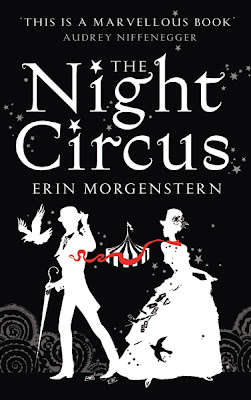 "The circus arrives without warning. No announcements precede it, no paper notices on downtown posts and billboards, no mentions or advertisements in local newspapers. It is simply there, when yesterday it was not."

"Opens at Nightfall; Closes at Dawn." The Le Cirque des Rêves is a circus unlike any other, just as this magical debut novel is equally unique. At the centre of The Night Circus spectacle are two specially gifted young magicians, Celia and Marco, pitted against each other in professional competition, drawn towards one another in love. Erin Morgenstern's literary fantasy has already drawn raves for its captivating evocativeness: "A world of almost unbearable beauty.... A love story on a grand scale: it creates, it destroys, it ultimately transcends." "A novel so magical that there is no escaping its spell... If you choose to read just one novel this year, this is it."

This book was absolutely incredible. In fact, unless something insane happens in the next few months, this book will end up being my book of the year. Just look at the other books I’ve read and see what it’s beaten out to get to that spot… That’ll give you an idea of just how awesome this book is.

First of all lets talk about the presentation, because that was a really pleasant surprise when I opened the package. First you’ve got this fabulous hardback book with that gorgeous dust jacket on. But not only that the hardback underneath is a beautiful red with embellishment,  the pages are black edged, and it even has a little red ribbon to mark your page in the book. Before I even started reading it, I was utterly smitten with it. I stroked it, I petted it, I introduced it to my family and friends, and then I started to read.

The prose is incredible. It’s this beautifully epic book that sprawls across time, place and characters and builds into this crescendo of imagination and magic.

And Morgenstern’s imagination? The things in this book, the tents upon tents in the circus filled with incredible ideas and concepts is mind blowing. I didn’t ever want this book to end, I just wanted to keep reading, to keep finding more and learning more and never emerge from this world again. It’s like the idea of the circus, of the effect it has on people, and this book creates the same effect.

The stories are brilliantly intertwined, with a running narrative of your own trip to the circus, Bailey’s past and the stories of Marco, Celia and the circus and everyone involved, all heading towards a breath taking culmination. And they are such elegant threads. You're not really sure where they're going or how they relate, and there are time jumps that sometimes throw you a bit when you're particularly immersed, but actually it's a simply stunning construction. Morgenstern knows precisely how to play her audience, and this book shows that. It's immense and quiet, and epic all at the same time, and it made me want to cry some parts were just so unbelievable.

I don’t really want to talk about the events in the book, because part of what I loved was not knowing what on earth was going to happen, and just relishing the journey and finding out page by page. So instead I just want to say how beautiful it was. The prose was exquisite, the characters incredible, and the imagination behind the construction and detail was absolutely stunning. I never wanted it to end, and having finished I just want to go back and re-read it. You know when it feels like something you've read has become part of you, so attached that it feels impossible to imagine yourself without it - when the story has touched you in ways that you haven't felt from a book in a while? This is how I feel about this book. I want to buy a kindle copy so I can have it with me wherever I go, and then my hardback copy to appreciate the sheer beauty in its construction.Because honestly, whoever designed the cover/entire spectacle of the book had read the book itself and understood the incredible things contained within the pages. The black fading into grey, the contrast between the black and the white - and the shock of red to mark your place in the circus when you leave it for a while.

Read this book. It’s stunning, incredibly constructed, and a brilliant story that will draw you in. I couldn’t actually find anything I didn’t like or would have liked to see more of – it was perfection as far as I’m concerned, and has shot straight up to become one of my top books of all time.

Let me leave you with two of many of my favourite moments in the book. First an act from the circus:

The woman wears a dress something akin to a bridal gown constructed for a ballerina, white and frothy and laced with black ribbons that flutter in the night air. Her legs are encased in striped stockings, her feet in tall black button-up boots. Her dark hair is piled in waves upon her head, adorned with sprays of white feathers. Her companion is a handsome man, somewhat taller than she, in an impeccably tailored black pinstriped suit. His shirt is a crisp white, his tie black and pristinely knotted. A black bowler hat sits upon his head. They stand entwined but not touching, their heads tilted toward each other. Lips frozen in the moment before (or after) the kiss. Though you watch them for some time they do not move. No stirring of fingertips or eyelashes. No indication that they are even breathing. “They cannot be real,” someone nearby remarks.
Many patrons only glance at them before moving on, but the longer you watch, the more you can detect the subtlest of motions. The change in the curve of a hand as it hovers near an arm. The shifting angle of a perfectly balanced leg. Each of them always gravitating toward the other. Yet still they do not touch.

And secondly a description of the clock that hangs at the gates of the circus:

But that is before it is wound. Before it begins to tick, the pendulum swinging steadily and evenly. Then, then it becomes something else. The changes are slow. First, the color changes in the face, shifts from white to grey, and then there are clouds that float across it, disappearing when they reach the opposite side. Meanwhile, bits of the body of the clock expand and contract, like pieces of a puzzle. As though the clock is falling apart, slowly and gracefully. All of this takes hours.
The face of the clock becomes a darker grey, and then black, with twinkling stars where the numbers had been previously. The body of the clock, which has been methodically turning itself inside out and expanding, is now entirely subtle shades of white and grey. And it is not just pieces, it is figures and objects, perfectly carved flowers and planets and tiny books with actual paper pages that turn. There is a silver dragon that curls around part of the now visible clockwork, a tiny princess in a carved tower who paces in distress, awaiting an absent prince. Teapots that pour into teacups and minuscule curls of steam that rise from them as the seconds tick. Wrapped presents open. Small cats chase small dogs. An entire game of chess is played. At the center, where a cuckoo bird would live in a more traditional timepiece, is the juggler. Dressed in harlequin style with a grey mask, he juggles shiny silver balls that correspond to each hour. As the clock chimes, another ball joins the rest until at midnight he juggles twelve balls in a complex pattern. After midnight the clock begins once more to fold in upon itself. The face lightens and the clouds return. The number of juggled balls decreases until the juggler himself vanishes.
By noon it is a clock again, and no longer a dream.