I have tried (and failed) over the last few days to put into words just how much I adore Deanna Raybourn’s writing. I finished her latest book, the fourth in the Lady Julia Grey series about five days ago, and have since been re-reading the previous three books – because I am that desperate to stay in the world she has created.
I discovered this series quite by chance, as a recommendation from Amazon because I’d bought Gail Carriger’s books. These being steampunk, I presumed I was in for a similar ride with Lady Julia Grey, but a hundred pages in and not a whiff of magic? No vampires, werewolves or dirigibles? I would have been peeved that Amazon had got me to buy this under false pretences, but by a hundred pages in I really didn’t care. These books are quite simply put, brilliant, and I was thrilled to discover that it wasn’t a trilogy as I had originally thought, but an unnamed number of books – basically as long as Raybourn continues to write them.  So the fourth one came out in October, and I waited eagerly for it to arrive, but when it did it sat on my bedside table waiting.
I was terrified that having loved the first three so much, and thinking that was the end of the series, that I was going to ruin it by reading this latest offering. I was an idiot – Dark Road to Darjeeling was quite possibly, the best instalment yet. 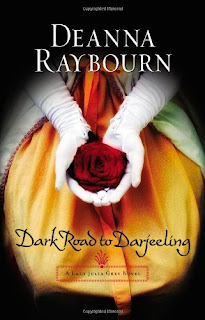 For Lady Julia Grey and Nicholas Brisbane, the honeymoon has ended...but the adventure is just beginning.

After eight idyllic months in the Mediterranean, Lady Julia Grey and her detective husband are ready to put their investigative talents to work once more. At the urging of Julia’s eccentric family, they hurry to India to aid an old friend, the newly-widowed Jane Cavendish. Living on the Cavendish tea plantation with the remnants of her husband’s family, Jane is consumed with the impending birth of her child—and with discovering the truth about her husband’s death. Was he murdered for his estate? And if he was, could Jane and her unborn child be next?
Amid the lush foothills of the Himalayas, dark deeds are buried and malicious thoughts flourish. The Brisbanes uncover secrets and scandal, illicit affairs and twisted legacies. In this remote and exotic place, exploration is perilous and discovery, deadly. The danger is palpable and, if they are not careful, Julia and Nicholas will not live to celebrate their first anniversary.
(Taken from deannaraybourn.com)
Dark Road is quite utterly delicious.  The new cover is divine, and it and the break away from the titles of the first three books in the series (Silent in the Grave, Silent in the Sanctuary, Silent on the Moor) signify the change and shift that has occurred since the end of the third book.
I think this was what made me the most nervous about reading the book – Julia and Brisbane are now finally married. All that deep intense brooding and passionate illicit kisses are things of the past, and I worried that with the legitimacy of the relationship and the fact that Brisbane is no longer allowed to be aloof and run away, that some of the magic of the first three would be lost.
I could not have been more wrong. This book marked a change, and it was most certainly a good one. To say it is better would be to undermine the first three books, and that is never going to happen (have I mentioned I love them?...) but Brisbane and Julia finally facing each other as man and wife adds a whole other layer that has so far remained untouched. They are facing each other as equals. There are still power struggles, but of an entirely new variety to those in the first three books. Yes Julia is still desperate to be accepted as an equal to Brisbane, and he is still incredibly protective of her, but I was forcefully reminded that as a first person narrative from Julia, we are only ever given her biased opinion. We never truly see a balanced perspective, and I was so glad when Portia gives Julia a stern talking to towards the end of the book and we finally appreciate (along with Julia) that she has been being selfish and not at all fair to Brisbane with her attitude and actions. It added another dimension that had not really been considered yet, and leaves an entirely new approach to move forward in the coming novels.
Along with this is Raybourn’s completely realistic approach to their married relationship, and I loved the deepening of the bond between them, the new levels of understanding, and the intimacy that they’ve never been able to achieve prior to their marriage.
The writing is exquisite – I was staggered upon discovering that Raybourn is an American writer. The voice is so impeccably English, the language flawless, and the research so thorough it really feels as though you are there, whether she’s taking you into an English drawing room, or through the heat of India.
The change in scene was delightful, the new characters incredibly drawn, and I think this is where Raybourn’s talent truly shines through – she creates a host of characters that are so real, and so believable – everything from the clothes and mannerisms to the motives behind their actions. I feel completely immersed when I read her work, and I adore it all the more for that escapism.
There is a sense of quiet that pervades the book, but one that rests on a knifes edge, with tensions mounting throughout and leaving the reader nervous even when there is no obvious cause for concern. It is impeccably done, and I think something that has improved over the course of the books since Lady Julia’s first foray into investigations.
The ending left me quietly sobbing, and again it amazes me how well Raybourn elicits emotions from the reader. It is terrible, but it is also life, and the poignant passages born out of grief and sadness, are quite possibly the best in the book – an impressive feat.
I could go on and on about how much I loved this latest instalment – it furthered the story, added new layers to the already complex relationships and set up new scenarios and pairings to be explored in the fifth book due out in 2011. If you haven’t discovered Deanna Raybourn and the Lady Julia grey series, make that your last find of 2010 – it won’t disappoint.
Posted by Rosy at 07:22